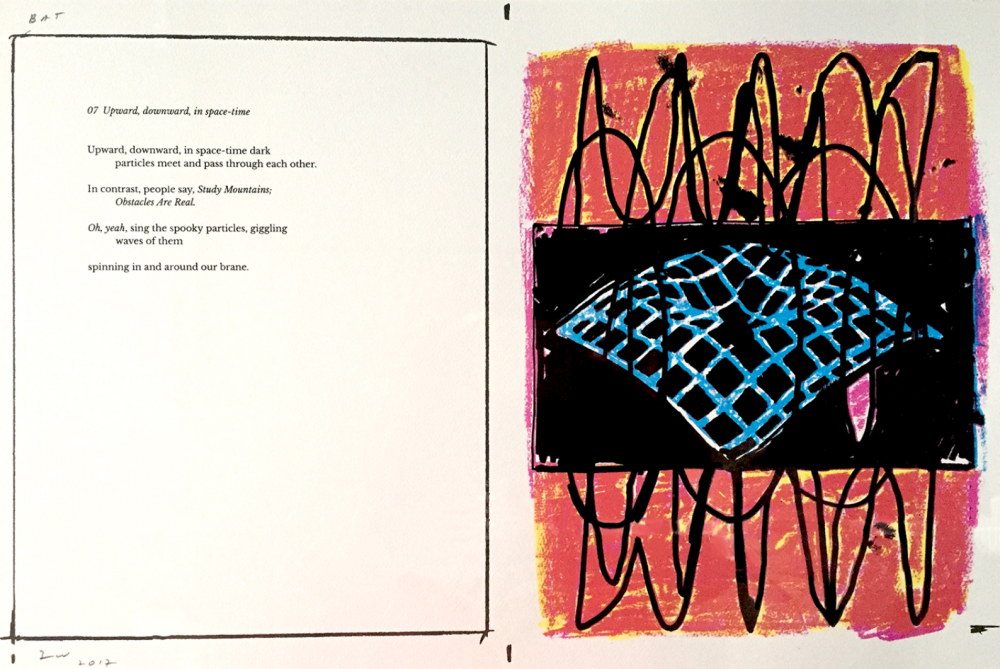 We start the journey at one red point — almost an activation button — on a screen-printed field of dark dots over yellow and loose scrawls of color. From this red point extends a rosy acute angle, like a thrown light or an opened portal. And in a text to the left of the image of print 01, a poem begins, “I shall not attenuate the nature of circularity…. / I shall venerate / the center that draws us in and spews us out.” This red point and this veneration begin the twenty-print suite of Sometimes times: Prints and poems, a collaboration between printmaker Terry Winters and poet Mark Melnicove, on exhibit through June 3 at Able Baker Contemporary. “I shall linger amorously over my hero, the point,” Melnicove pledges, in a show that meditates on the particles, waves, and gravities that comprise, thwart, and move us. Sometimes times will close its run with a June 2 reading by Melnicove.

Winters and Melnicove, who have known each other for years, created the sequence of Sometimes timesthrough an interactive process: once the project was initiated by Colby College Museum of Art, which holds Winters’ complete print works, Winters sent Melnicove a series of drawings. Melnicove perused, wrote, and sent to Winters the poems his work inspired; Winters then altered some drawings in response. To print, Winters drew each plate individually with black litho crayon, and the images are printed with braille ink — an especially thick, viscous ink that lends the prints tactility and depth. It’s the proofs of Sometimes timesthat are on exhibit at Able Baker; we follow the arc of the twenty prints through both floors of the gallery, gazing down into them in long vitrine cases.