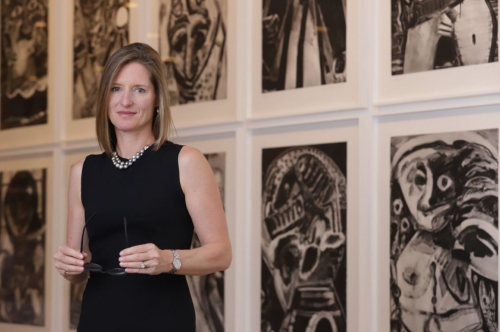 With nearly 25 years in the books, Two Palms has worked with many prominent names in modern art like Sol Lewitt, Kiki Smith, Jeff Koons, and Dana Schutz, helping them add quality prints to their repertoire of work. While the SoHo-based studio utilizes the more common methods of printmaking like monoprints, monotypes, and silkscreening, Two Palms takes pride in experimenting with more unique and unconventional methods—including the nearly-extinct Woodburytype technique.

To learn more about the studio, Woodburytype, and the printmaking world, Whitewall spoke with the co-owner of Two Palms, Evelyn Lasry.

WHITEWALL: Can you tell us about the beginning and early days of Two Palms?

EVELYN LASRY: My husband, David Lasry, founded Two Palms in 1994 with one hydraulic press. He received an MFA at Yale and was drawn to the collaborative nature of printmaking more than the solitary work of an artist, and decided to open a print studio.

The hydraulic press was being delivered to our first location on Varick Street when Mel Bochner, who was one of David’s professors at Yale, walked by. Mel saw the press, spoke with David about the studio he was setting up, and he became Two Palms’ first artist.

I joined the team in 2001 after a decade-long career at Ferragamo. By then, we were lucky to be working with many talented, venerable artists like Cecily Brown, Chuck Close, Kiki Smith, Carroll Dunham, Terry Winters, and Sol Lewitt. Those artists recommended us to other artists and from there we were able to grow our roster mostly by word-of-mouth...

WW: Two Palms still uses the Woodburytype technique for printmaking. How does this compare to the techniques more commonly used in modern day printing and why did you choose to continue using the method?...